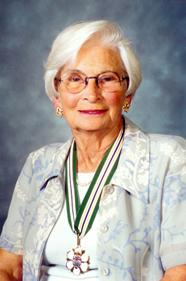 Dr. Beverly DuGas is well-known, both nationally and internationally, for her
work in nursing education and for her nursing textbooks, which have been widely used throughout North and South America, Europe, Asia, and Africa, as well as the South Pacific region.

Her professional career has combined nursing, teaching, writing, and consulting. Starting in 1953, Dr. DuGas worked first as a staff nurse at VGH, then as an Instructor in the School of Nursing. Dr. DuGas took over from Dr. Helen Mussallem as the acting director of the School of Nursing at VGH in 1957 when Helen went on leave of absence to undertake a project for the Canadian Nurses Association. Helen never returned to VGH, and Dr. DuGas was formally appointed as director of the School of Nursing in 1960. She introduced major curriculum changes in the 1950’s and ’60’s, integrating theory and practice at the bedside early in the teaching program so students could observe and practice nursing care on real patients instead of on a dummy in the Nursing Arts Laboratory. Approached by an American publisher, Dr. DuGas and a colleague wrote a first-year nursing textbook for the North American market.

In 1965, she resigned as director when asked by the World Health Organization to set up a post-basic baccalaureate program for graduate nurses in India. After completing her doctorate, Dr. DuGas joined Health and Welfare Canada as a nursing consultant in the Health Manpower Directorate, becoming the director of the Planning Division in 1972. Also, in 1972, Dr. DuGas received an Honorary Doctorate of Laws from the University of Windsor for her contributions to the nursing profession.On leave of absence from Health and Welfare, she undertook two assignments with World Health. In Suriname she did a Nursing Manpower study. In Barbados she established a program to prepare teachers for the Health Sciences field in the Caribbean.

From 1977 to 1982, Dr. DuGas spent most of her time as a health planning consultant in developing countries. In 1982, she joined the faculty of the School of Nursing at the University of Ottawa as the coordinator of continuing education where she established a distance education program for the post-RN baccalaureate program, becoming the acting associate dean of the Faculty of Health Sciences and the director of the School of Nursing in 1987. She retired from that position in 1989.

She continued to be active in nursing and was the founding President of the B.C. History of Nursing Group on the RNABC. She also undertook three assignments for WHO in which the focus was on distance education. These included setting up a distance education network for the nurses in Fiji, a feasibility study in China and a workshop in Manila. She undertook her last overseas assignment in 1998, going to India for UBC to help with their new partnership with a nursing school in the Punjab. Dr. DuGas was made a Member of the Order of B.C. in 1999 and a Member of the Order of Canada for her contributions to the health field in 2001.

Her family has always played a large part of her life. Her home, both in Vancouver and Ottawa was always full of young people. She has seven grandchildren and took three with her on her overseas assignments. One went to France and Switzerland, one to China and one on her last assignment to India. She also had three of the grandchildren living with her at various times during her retirement while they went to college and university.

A stroke during heart surgery slowed her down until she discovered she could still write, using the computer. She wrote a book of stories about her life in India, originally for the family. With Bud’s help as editor and project coordinator, however, they decided to have it printed with the proceeds of sales going to the History of Nursing Archival Fund. She is now writing stories about the VGH School of Nursing

Dr. DuGas is probably best known internationally for her nursing textbooks. Her latest textbook, Nursing Foundations. A Canadian Perspective, originally co-authored with Emily Knor and published in 1995, is now in its second edition, with Lynne Esson and Sharon Ronaldson as co-authors. Previous editions of the text under the title Introduction to Patient Care have been translated into six languages and used in over forty countries. She is also co-author (with Ann C. Beckingham) of the nursing text Promoting Healthy Aging: A Nursing and Community Perspective (St. Louis: Mosby, 1993).

Dr. DuGas moved into the Waterford when it opened in 2003 to be near her daughter, who lives in Tsawwassen and her oldest son, who lives in Langley. She has been happy there and made many new friends. She has four children, seven grandchildren and two great grandchildren.

Other material provided by the BC History of Nursing Society archives
http://bcnursinghistory.ca/archives/biographical-files