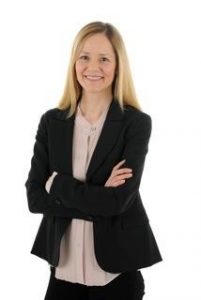 For Fuchsia Howard, nursing and health care have been a core part of who she is and her life’s direction since she was a young girl. Her choices may not have always seemed obvious, but her journey has caught the attention of many of her colleagues and friends and offers inspiration on a number of levels.

Her relationship with the UBC School of Nursing began after working for four years in acute care at Vancouver General Hospital; she decided to pursue a master’s degree. She had a background in surgical oncology and knew this was where she would focus her research.

Near the end of her program she applied for and received funding from the Michael Smith Foundation for Health Research, but it would not begin until after she completed her MSN. The obvious decision to Fuchsia was that she should apply to the PhD program and continue her research.

Her doctoral thesis was on women’s decision making about risk-reducing strategies in the context of hereditary breast and ovarian cancer. “I examined the process of making those decisions, as well as women’s constructions of the right time to make those decisions.”

“I’ve always been interested in women’s health,” she says, “partially because throughout my life I have been surrounded by very strong and amazing women. I could see there was sometimes inattention to women’s needs and wanted to help address this.”

Fuchsia is drawn to qualitative research, “because it provides voice to patients as opposed to the voice of a dominant discourse. I think this interest was influenced by my mom who is partially nonverbal and thus, often needs assistance to express herself and her wishes and really relies on the people around her.”

When she was about five years old, Fuchsia’s mother was in a car accident and suffered severe injuries that included a traumatic brain injury and quadriplegia. Her brain injury affected her such that she couldn’t eat or speak, and she had significant difficulties with her memory. She was transferred to Vancouver (from their hometown of Nelson) and spent two years there before returning to Nelson, where she was placed in an extended care facility. She remained in the facility for about ten years, during which time a group of individuals eventually advocated for her and fought for her transfer to community care.

Once she moved into the community she became more engaged, began making numerous efforts to communicate with those around her and, with assistance, now leads an active social life. “It’s been amazing to see the changes in her. She is engaged and is happy” says Fuchsia. “Sometimes I get really down on the world, and then I think how ridiculous that is. My mom is able to have a positive attitude and says wonderful things about the world. In spite of everything she’s gone through she still manages to shine and inspire the people around her.”

When it comes to life and death situations and decision-making her mother’s care team often looks to Fuchsia. Although honoured, she finds this difficult at times, because as a nurse she has opinions about what is right for a patient, but as a daughter she sometimes views things quite differently.

“It’s been challenging for me as a nurse, who believes very strongly in the rights of patients and honouring their perspectives, yet not seeing that be the case with my mother in some health care situations. But in a way being a nurse has really helped, and my mom’s situation was ultimately one of the reasons I went into nursing – I wanted to be informed and didn’t want to be on the outside of her care.”

“One of the problems is that she is among the first people to survive so long after such a traumatic accident. Another is that when health care professionals first see her some see a woman who is disabled, speaks slowly, can’t eat and who might not remember meeting them. They don’t understand how much she has accomplished in spite of those things.”
As someone who has really learned from the people who support her mother, Fuchsia knows that there are effective ways of engaging with individuals. As with her research, she focuses on patient-centered engagement. “So for my mom,” she says, “rather than asking questions about what she did yesterday, we tell her what she did, which triggers her memory, and then we can begin to have a conversation. You really need to learn to engage under her terms.”

Her mother’s accident, and consequent care, has shaped the way that Fuchsia approaches her research and the way she views health care relationships. She sees the importance of patient-centered care and knows the benefits first-hand.

In her research Fuchsia uses a relational approach, which recognizes that peoples’ decision-making occurs within the context of their lives. People can only enact a decision as long as a choice is available to them. And she recognizes that the group of women that have been advocating for her mother all these years are a huge part of her mother’s ability to make those choices about her own life and health. “It’s been so interesting to witness how their commitment to her influences the health care professionals’ commitment to my mom, but also who my mom becomes.”

Seeing her mother struggle against and overcome her life’s obstacles enabled Fuchsia to do her PhD. “Witnessing her overcome things that no one thought possible gave me the confidence to pursue those dreams.”

“Growing up people always said that it must have been difficult, but I never saw it that way. I always saw her as my mom, and didn’t know her any other way. I think that if anything, she has given more to me because I have been able to look up to her as a role model who can overcome obstacles, and is proud to be who she is.”