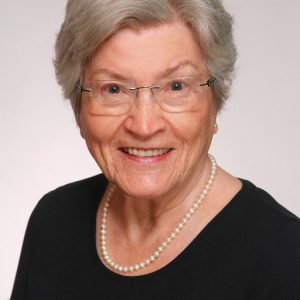 Born in Broderick, Saskatchewan, Marilyn obtained her RN diploma at the Victoria Hospital School of Nursing in Prince Albert, Saskatchewan in 1953. She was clearly a standout even then, earning the 1952 Clinical Proficiency Award in 1952 and the General Proficiency Award in 1953. She went on to work in several different Saskatchewan hospitals, mainly in obstetrics and pediatric ICU. Then, relocating to Hamilton, Ontario for two years, she became charge nurse at Dr. Rygiels Hospital for Children With Multiple Handicaps. Moving again to BC, she shifted her practice to psychiatry at Riverview Psychiatric Hospital, Port Coquitlam.

Joining the “Returning RN” contingent of the BSN program in 1977, Marilyn graduated with her BSN degree in 1979. After graduation, she went on to teach psychiatric nursing at Douglas College, obtained her Master of Arts in Communication from Simon Fraser University in 1988, and her PhD at UBC in 1995. Marilyn’s PhD dissertation examined hearing loss in federal prisoners, and she continues to research its psychosocial implications. Over these years she also took on a number of research consultancies with government and other health care organizations. From 1995 to 2001, she was Executive Director for the Western Institute for the Deaf and Hard of Hearing in Vancouver, B.C.

For Marilyn, the challenge of acquiring a university education with a profound hearing loss, in a day when accessibility was an unknown concept, motivated her. She taught her BSN classmates how best to assist her with note taking and studying, and was a valued member of the group learning activities. UBC School of Nursing Professor Sally Thorne, who was a BSN ’79 classmate, remembers Marilyn as the kind of person who teaches inclusivity with her way of being in the world. Having her in the class, and learning from the way in which she enthusiastically embraced and managed her distinctive learning challenges, was a powerful inspiration and privilege.

Among her many honours, she has received the Order of British Columbia (1993), the Distinguished Service Award from the BC Association of Speech/Language Pathologists and Audiologists (1999),  and the Queens’ Medals Honouring Volunteer Service (1993, 2003). In 1994, the Canadian Hard of Hearing Association named an Award of Merit in her name. And in 2019, she was honoured with the UBC Faculty of Applied Science Dean’s Medal of Distinction.

Marilyn believes that opportunities have never been greater for creating positive social change for people with hearing loss. Her BSN’79 classmates are not at all surprised. They learned 40 years ago that when Marilyn decided something needed to change, she went ahead and made it happen. What a remarkable career and life she has had, and UBC Nursing is proud to have played a part in that.