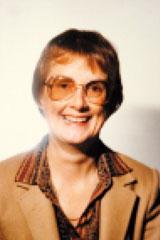 Betty was born in the Vancouver General Hospital in 1934 and entered that venerable institution 20 years later as a student nurse. She began the degree program in nursing at UBC in September 1953 and graduated from VGH in August 1956, topping those in BC writing the RN examination at that time. Betty returned for her final year at UBC, graduating with a Bachelor of Science in Nursing degree in 1957.

Work as a Public Health Nurse (PHN) with Metropolitan Health, the City of Vancouver’s Health Department, was her first career choice. She met her husband, Tom, at a Nurses/Engineers mixer in October 1954 and in 1958, marriage and a move to Calgary resulted in a pediatric nursing position and later a clinical instructor position with the Calgary General Hospital School of Nursing.

Family responsibilities created a hiatus in Betty’s nursing career, although brief periods in casual service kept her current. She returned to a full-time Public Health Nursing (PHN) position in the Simon Fraser Health Unit (SFHU) in 1971. Public Health Nursing with the province was an exciting opportunity for nursing practice at that time. The PHN provided total care in her district; this included home nursing care, school nursing, baby clinics, prenatal classes, postnatal and newborn visits and communicable disease followup. It was a very challenging role which was eventually divided to provide specialized services with the PHN providing Preventive services while Home Care Nursing and Long Term Care became separate programs. In 1978 the Provincial Government sponsored Betty to attend UBC in the Master’s Program in Health Services Planning. She completed her studies while continuing to work part time, graduating with a Master of Science degree in 1981. Her thesis evaluated four years of scoliosis screening at SFHU. This resulted in cancelation of the program for lack of validity. She published her program evaluation of scoliosis screening in the Canadian Journal of Public Health, July 1984.

The opportunity for leadership roles in Public Health presented in 1975 and 1980 when Betty became, first, a Senior Nurse, and then, Nursing Supervisor at SFHU. It was a period of rapid development in preventive programming. Betty became an active promoter of immunization campaigns, couples prenatal classes, breastfeeding clinics, early postpartum visits, involvement of volunteers in screening programs, flexible scheduling of nursing staff to enhance service and Sun Smart initiatives, to name but a few timely initiatives. Other opportunities for leadership came when she served as Health Unit Director at SFHU when the position was vacant. Public Health Nursing headquarters in Victoria also seconded Betty to work as a Nursing Consultant part-time on several occasions. She found the opportunity to be involved in nursing policy development a very rewarding experience. Betty retired from nursing in 1997.

In 1977 The City of Coquitlam appointed Betty to the Board of Trustees of Saint Mary’s Hospital in New Westminster on the recommendation of Dr. John Blatherwick, Medical Health Officer and Director at SFHU. He believed the experience would benefit her studies in the Master’s Program she was entering at UBC. Her service on the board lasted for over 25 years, culminating in three years as board chair. Many of those years were devoted to actively defending the hospital from repeated efforts to close this respected, efficient, effective provider of compassionate health care to the region and indeed some specialized services to the province. A controversial political decision to close the hospital, after 117 years of faithful service, was made in 2002. Betty continues to serve on the Saint Mary’s Health Foundation Board as treasurer. She actively participated in the publication of a book in 2008 telling the Saint Mary’s story.

Other post retirement activities have included volunteering with the Canadian Cancer Society, traveling with Tom, her husband of 51 years, and keeping abreast of the activities of their daughter, son, and four grandchildren. As well, Tom and Betty are keen duplicate bridge players. Betty looks back on her 33 years of nursing with fond memories of a career based on the sound education received at VGH and UBC, as well as the support of family, mentors and colleagues over those fulfilling years. Written in September 2009.