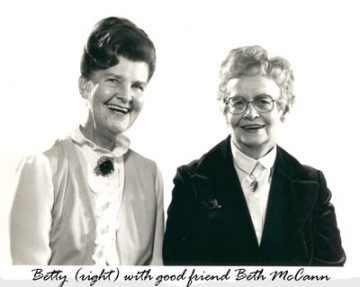 Betty was born on May 19, 1917 in Calgary, Alberta and received her high school education there. In 1939 she graduated from the Vancouver General Hospital School of Nursing. Following graduation she worked at VGH as a staff nurse, head nurse and building supervisor. In 1950 she joined the staff of the Division of Venereal Disease Control in Vancouver as a nursing instructor and later, superintendent of nurses.

Betty received a diploma in Clinical Teaching and Supervision from UBC in 1955 and a BSN in 1960. In 1965 she attended the University of Washington and earned a Master of Nursing degree. In 1960, she joined the nursing faculty at UBC where she remained until her retirement in 1982. Betty taught mainly community health nursing in the undergraduate program and sat on numerous committees. She chaired the fourth year BSN program for many years and acted as program advisor for Registered Nurses entering the School. A major portion of her time involved coordination of student experiences with various community agencies and she became well-known and highly regarded by them. Betty was a respected and well-loved professor known for her fairness and devotion to nursing. She had an open-door policy and spent many hours supporting and counselling students. In addition she had a wonderful sense of humour!

Betty retired in 1982 and lived in her home in Vancouver with her sister Margaret. A dog lover, she enjoyed caring for her two dogs as well as looking after those of friends. With her close friend, Beth McCann, she toured New Zealand and the South Pacific. When Beth died suddenly in 1986, Betty organized Beth’s numerous and lengthy files and memorabilia – a massive undertaking – and presented them to the School They have become an integral part of the School’s Historical Collection, many accepted by the UBC Archives.

For more than twenty years she was an active member and loyal supporter of the UBC School of Nursing Alumni Division, serving for many years as treasurer. Betty died on January 9, 2003 following a brief illness.

Submitted by Ethel Warbinek
Other material provided by the BC History of Nursing Society archives
http://bcnursinghistory.ca/archives/biographical-files