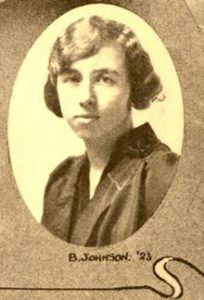 Beatrice (Bea) Fordham Johnson entered the newly formed Department of Nursing at UBC in 1919. She graduated from The Vancouver General Hospital Training School in 1922, and received a BASc (Nurs) in 1923, one of the first three students to receive a nursing degree in the entire British Empire.

She was born in Vancouver on November 29, 1899 to a prominent BC family. Her father was president of BC Sugar and also served as Lieutenant Governor of BC.

In the 1923 yearbook, Beatrice’s classmates described her as “one shining example of what a student should be. She [was] wrapt in her studies and yet finds time to squeeze in sports and other joys of student life… taking a prominent part in the spring play… and frolicking in our basketball team”.

While at UBC Bea joined the Players’ Club and remained active during her years in residence at VGH traveling around the province with the club during its summer circuits and met Professor Frederic Wood, her future husband.

She and her nursing classmates took part in the Great Trek proudly carrying a banner proclaiming, “We are the first three women in the British Empire to get degrees in nursing.” After graduating in 1923, Bea became head nurse of the Eye, Ear, Nose and Throat Operating Room at VGH. Soon after, she accepted a position as district nurse with the Victorian Order of Nurses in Montreal, working on the docks, giving health lectures and providing pre and post natal care.

She returned to Vancouver in 1924, to accept a head nurse position at VGH emergency department. In 1925, she married Professor Wood and as was typical of women of her era, left nursing when she married. She continued her interest in nursing through her volunteer work at VGH with the Women’s Auxiliary and during WW2, she worked with the Red Cross.

Her participation in theatre continued throughout her life. She provided encouragement to the Players’ Club and was a patron of the Freddy Wood Theatre.