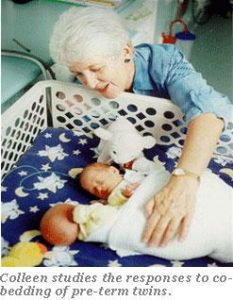 Dr. Colleen Stainton (BSN ’61), retired in 2007, having moved back to B.C. after 10 years in Australia. There, she was the first Clinical Chair of Women’s Health Nursing in the Faculty of Nursing and Midwifery at the University of Sydney and the Centre for Women’s Health Nursing, Royal Hospital for Women, and filled her days to capacity.

From early on Colleen’s interest lay in maternity and neonatal care, and with master’s preparation at the University of California, San Francisco (UCSF) became a perinatal clinical nurse specialist and developed a research focus on bonding and attachment issues. She also completed a doctorate at UCSF. Her career focus was to improve the nursing and midwifery role in health care through linking and integrating education, research and practice. After 25 years with the University of Calgary’s Faculty of Nursing, she was recruited to Australia. “I considered the job in Australia my bliss job where I could really use my experience as educator and researcher,” said Colleen.

Since the age of three, Colleen wanted to be a nurse, and throughout her career she embraced challenging projects and roles from lobbying to retain a women’s hospital in Calgary to developing curriculum and research in maternal-infant care with professionals from Nigeria, Taiwan, Sweden, Canada and Japan. Colleen was a founding member of a faculty group from Foothills Hospital, Mount Royal College and the Faculty of Nursing at the University of Calgary where she developed and taught advanced nursing practice roles and established the international maternity nursing conference group in 1986 with a group of international colleagues. She was awarded Rotary’s Paul Harris Fellowship for work in Guyana.

Colleen remembers fondly her time in the nursing program at UBC. Her class was the last to go through the joint Vancouver General Hospital/UBC program. “We were taught from a theoretical framework,” says Colleen, “and developed skills in campus labs prior to hospital experience.” Her class still reunites and talks about their UBC experience— they meet every five years for a few days and have a lunch in the years between— the 45th reunion was in September 2006. “Nursing was a very satisfying place to live my life,” she says, “and my time at UBC provided such solid knowledge and skills for practice. A wonderful group of faculty as well as classmates and colleagues, both ahead and behind me in the program, instilled in me a patient-focused view but very importantly, a belief in my own value as a nurse.”