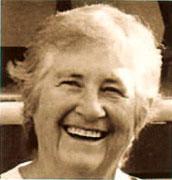 A force to be reckoned with at all stages of her life, Carmel was born in 1933 and grew up with the animals in the wide open spaces of Larras Lee Station in New South Wales, Australia. After training as a nurse in Sydney, she headed out to see the rest of the world, nursing in places such as Papua New Guinea.

A Canadian since 1960, she entered UBC as a post-RN and obtained her BSN in 1982, later also acquiring an MA in Adult Education from UBC. Among her many professional positions, she taught at the UBC School of Nursing for several years in the 1990s. Her faculty colleagues and students remember her intensity, creativity, and unabashed passion for a lively – even fierce – debate. Carmel was a woman of ideas and opinions, an adventurer, and a champion for underdogs both literal and figurative.