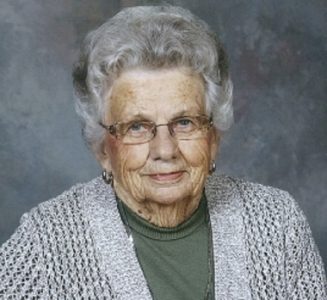 It is with great sadness and heavy hearts that we announce the sudden passing of our loving mother, Dodie (Ruth) Anderson on December 14, 2020, at the Shuswap Lake General Hospital. She had a bad fall and was unable to recover due to the Covid 19 virus. Many thanks to the Emergency Staff, Dr. Heunis, Dr. Goldberg, and the nurses on the 2nd floor. She received great care from everyone. Dodie’s surviving family; daughter Susan (Brad), son Phil (Diana), grandchildren; Sandra (Andy), Tyson (Holly), Erin (Kevin), Carrie (Jay), Carla, Kyle (Lindsay) and 14 great-grandchildren. Dodie was born in Dawson City, Yukon Territory. Graduated from high school at age 15. Went to Kamloops and UBC for business courses until she could enter nursing school 1947-1950 at Vancouver General Hospital. She won a Gold medal for “Excellence in Nursing” and Academics. Married Peter September 2, 1950, lived in New Westminster, had children, worked part-time at Royal Colombian Hospital 1959-1967. Returned to UBC from 1967-1969 and got her degree. Became a nursing instructor at RCH in 1969 and then became Director of Nursing at RCH from 1974-1976. Dodie retired in 1976 and moved to Sorrento with Peter. She became Director of Nursing at Cariboo College in Kamloops for 2 years. Then took on the title of Administrator and helped with the planning of the Chase and District Health Center. In the meantime, she was the BC representative on the Canadian Testing Service for nurses 1977-1980 and this was the beginning of Canadian Nursing Exams (they were previously purchased from the USA). Dodie loved her church and volunteered her services wherever needed. She was a board member of St. Mary’s church for 13 years, a Founding member of Sorrento & District Hospice Society, a life member of the Chase Fish & Game Club, a founding member of Shuswap Lions Manor, completed in 1986. She also volunteered with Sorrento Hall Association for 15 years. Dodie and Peter received the “Citizens of the Year” award in 1988 for all their hard and dedicated work to the community. She loved travelling whenever she could and camping was always an option. Happy hours were always welcomed. Dodie moved to Salmon Arm 2008 after Peter died. She remained a faithful parishioner of St. Mary’s in Sorrento until 2014 then attended St. John’s in Salmon Arm. Dodie resided for the last 2 1/2 years at Lakeside Manor and had made many friends there. Dodie had a very full life and was loved and respected by all who knew her. We are planning a Celebration of Life in late Spring 2021. Donations in Dodie’s memory can be made to St. Mary’s or St John’s Churches or any charity of your choice. 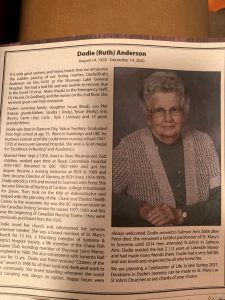